Water howellia usually flowers in May and June, with small trumpet-shaped blooms ranging from white to light purple in color, at or above the water surface. Flowers emerge above the surface of the water and open into what look like tiny white lobelias. The flowers are primarily self-pollinating.

States in which Howellia aquatilis is known to occur: Currently known from California, Idaho, Montana, and Washington. Historically found in Oregon. Was discovered in 1897 by brothers Thomas and Joseph Howell on Sauvie Island, which is near Portland, Oregon, a state in which it has since become extinct. This aquatic annual species is distinctive enough that it is the only member of its genus.

The dominant habitat for Howellia aquatilis is small, vernal, freshwater wetlands and ponds with an annual cycle of filling with water and drying up late in the season.These vernal ponds and wetlands usually fill with water over the fall, winter and early spring, but then at least partially dry up towards the end of the growing season. Depending on annual patterns of temperature and precipitation the drying of the pond may be complete or partial by the fall. These sites are usually shallow and less than one meter in depth, although water howellia is sometimes found in water up to two meters deep. The plant grows in areas that were once associated with glacial potholes and former river oxbows that flood in the spring, but usually dry at least partially by late summer. It is often found in shallow water (1-2 meters) and on the edges of deep ponds that are partially surrounded by deciduous trees. 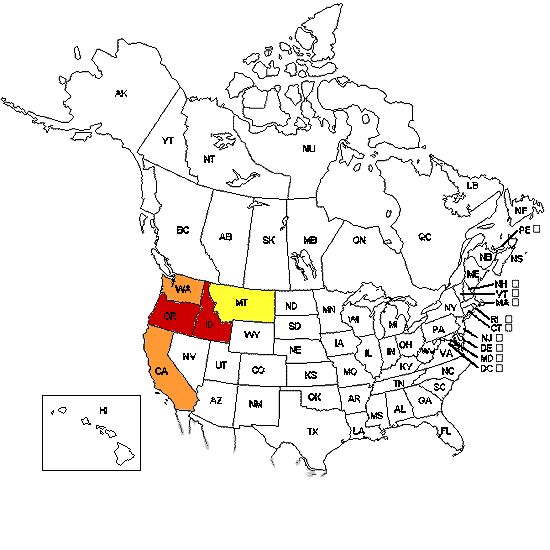 If you do spot one please note were it is (your phones GPS can really come in handy for this) and tell the U.S. Fish and Wildlife Service as soon as you can.